It is official, Denver International Airport celebrated its 20th anniversary with a record setting 54 million passengers in 2015.

The record growth was made possible by solid traffic throughout the year that included a record number of passengers in April and the last four months of the year.

International traffic in 2015 was flat compared to the previous year, 2,292,613 in 2015 vs. 2,208,209 in 2014. A DIA press release indicates that the use of the airport’s custom facility increased by 16%; however, Canadian preclearance flights declined 22%. The Canadian shortfall was attributed to the decreased activity in the oil and gas industry caused by lower prices for a barrel of oil. 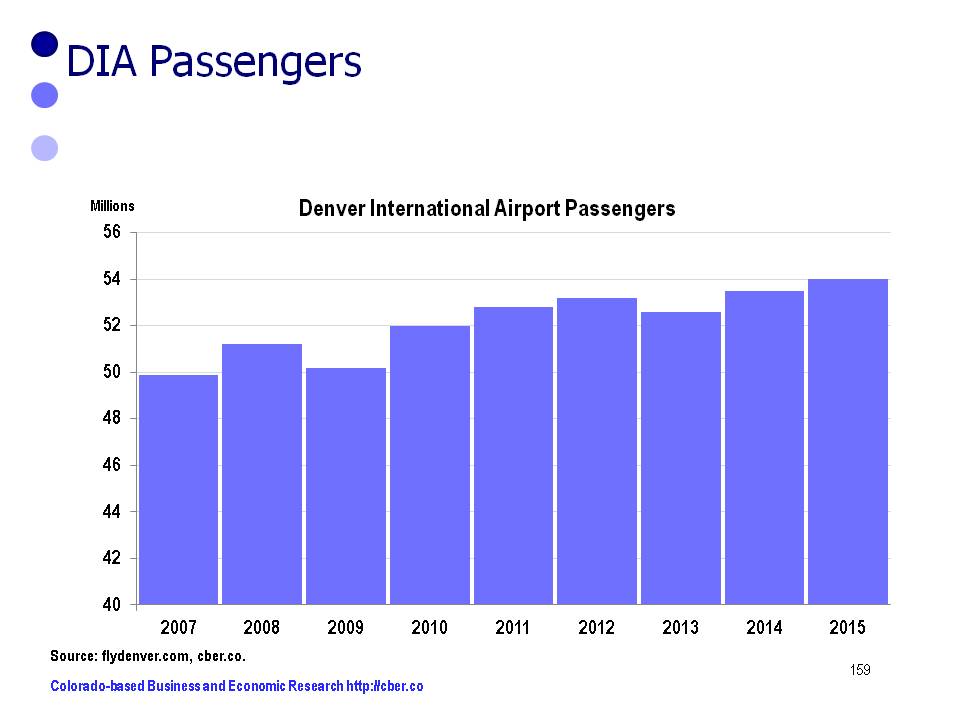 United continued to be Denver’s airline of choice with 42.3% market share. Southwest was second with 29.8% followed by Frontier with 12.4%.

The airline with animals on the tails of its planes had a disastrous year in 2015. It led the industry in complaints and the number of Frontier passengers in 2015 declined by almost 32% from the prior year.

During each of the 20 years that DIA has been in operation, the airport has become more important to the Colorado economy. That will continue to be in case in the years ahead with the addition of the Westin Hotel at the end of the terminal.

In addition there will be a stronger connection to downtown Denver when the light rail project between DIA and Denver is completed. Over the past 20 years businesses have sprung up around DIA. A prime example of that is the Gaylord project that is expected to open in 2-3 years.

DIA has two distinctive competencies over many other airports. First, it is located in the middle of the U.S. Second, it has room to expand when growth becomes necessary.

DIA is poised to be an economic engine for Colorado in 2016 and many years into the future.