At the midpoint of the year the U.S. economy is on solid footing and the second half of the year will be much stronger than the first half. The Colorado economy continues to outperform the U.S. in its rate of growth for population, employment, and GDP.

Average Colorado employment is 68,600 greater than the same period last year, with the potential of being revised upward at a later date. 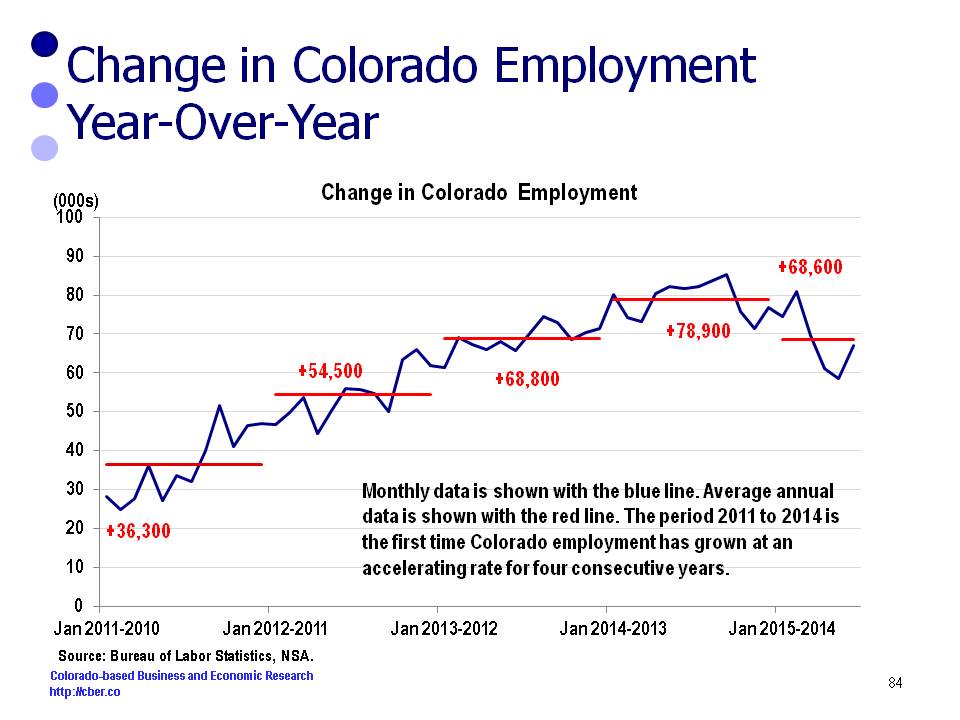 As has been the case in the past, the sectors with the top job growth are: Health Care; Accommodations and Food Services (part of the Tourism Industry); Construction; Professional, Scientific, and Technical Services; and Manufacturing. These sectors accounted for about 72% of total job growth in the first half of 2015.

The Bureau of Economic Analysis has released the 2014 Gross Domestic Product for Colorado. The state’s Real GDP expanded at a rate of 4.7% compared to 2.2% for the U.S.

Key Data Points for Colorado
QCEW Revisions – Recent revisions to Q4 2014 could cause 2014 employment to be revised upward in the March 2016 benchmark revisions. There was stronger momentum coming into 2015 than originally anticipated.
Population – Colorado’s population will increase by 88,800 people this year.
Unemployment Rate – 4.4%, down from 5.0% a year ago.
MSA Unemployment Rate – Boulder and Ft. Collins have the lowest rates at 3.5% and 3.6% respectively.
2014 Colorado GDP – The state Real GDP grew by 4.7% in 2014 compared to 2.2% for the U.S.
2014 Contribution to GDP Growth – The Mining sector accounted for 6.2% of GDP and 18.2% of GDP growth in 2014.
Wage and Salary Employment – On average Colorado has added 68,600 jobs this year based on current data. This is not adjusted for the projected revisions.
Leading Sectors for Growth – About 72.2% of the jobs have been added in the Health Care; Construction; Accommodations and Food Services; Professional, Scientific, and Technical Services; and Manufacturing.

For details or more information about the Colorado economy, check out the 2015 cber.co forecast and economic updates on this website, https://cber.co.