On December 4th, the Bureau of Labor Statistics released its monthly update for U.S. nonfarm payroll employment for November. The number of non-seasonally adjusted jobs increased by 2,650,000 in November compared to a year ago.

The November unemployment rate remained at 5.0% down from 5.8% a year ago. There were 7.9 million unemployed compared to 9.0 million last November.

A look at the seasonally adjusted data shows that job growth occurred in construction, professional and technical services, and health care. Losses occurred only in the mining and information sectors.

• Professional and technical services added 28,000 jobs in November. About 11,000 jobs were in accounting and bookkeeping services and 5,000 were in computer systems design services. Compared to a year ago, the PST sector is about 298,000 jobs greater than the same period in 2015.

• Employment in food services and drinking places increase by about 32,000 jobs in November and it is up by 374,000 greater than a year ago.

• Combined, the four sectors mentioned above show job gains of about 1.4 million compared to a year ago.

• Compared to the prior month there was little change in the following sectors: manufacturing, wholesale trade, transportation and warehousing, financial activities, and government.

All eyes will continue to be on the Fed and their meeting later this month. Although U.S. employment has increased at a decreasing rate through 2015, the latest BLS report is probably strong enough for them to finally announce a hike in short term interest rates.

Moving forward the $64 question is, “Will job growth continue at the rate experienced in the second half of the year or will we move forward at the more robust rate shown in the first half of the year?” 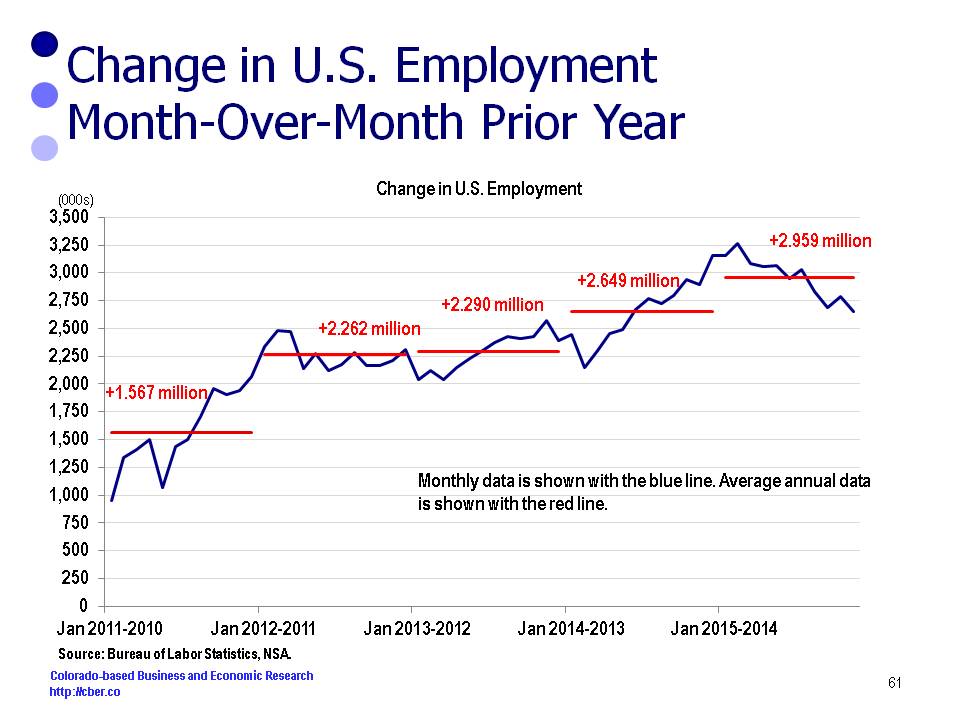