Since the second quarter of 2012, the price of gasoline has slowly declined in the U.S. and Colorado.

At this point, the impact in total gasoline prices for the year is primarily psychological even though prices have dropped below $3.00 per gallon in some locations. The difference in total prices paid for 2014 compared to last year are negligible.

The Good News – At some point lower gas prices may increase discretionary income for consumers. At the moment that is not likely because inflation has driven other costs higher, especially housing costs.

The Not So Good News – Typically, the impact of lower oil and gasoline prices on the state is negative. In other words, consumers will benefit; however, state coffers will not be as full because tax collections will be lower. 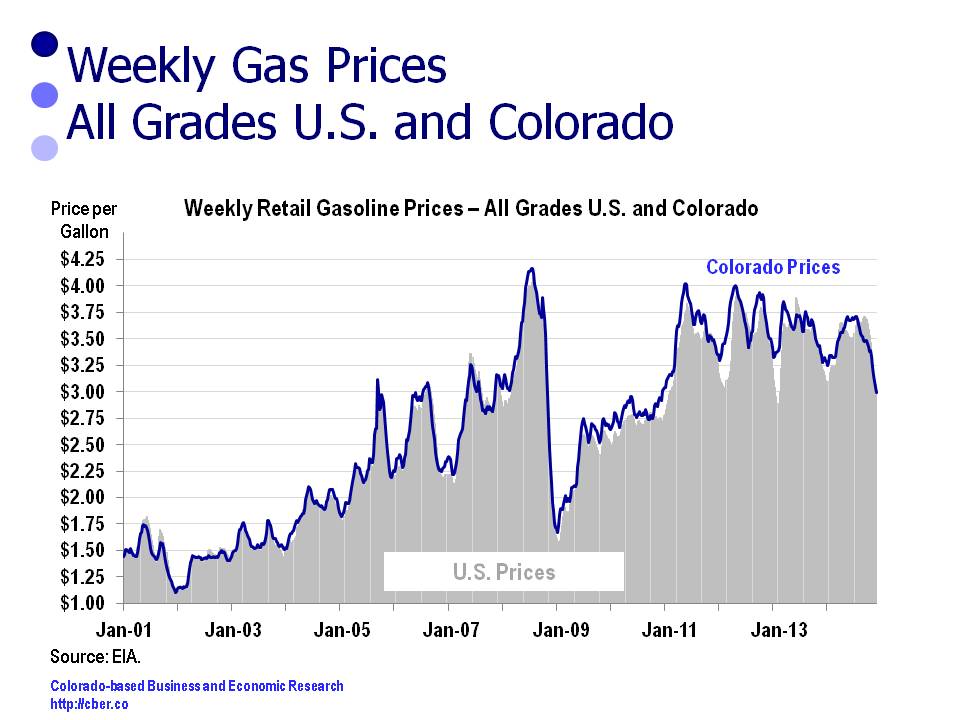 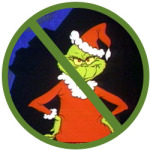 The outlook for holiday retail sales is upbeat. It is doubtful the Grinch will be visiting Colorado this Christmas season. Most likely he will be in parts of Europe, Japan, and Mexico where the economy is not as strong.

The National Retail Federation expects holiday sales to increase by 4.1% this November and December compared to a 3.1% increase last year. Over the past 10 years, average holiday growth has been about 2.9%. In other words, lower unemployment rates and an improved economy means retail trade sales this holiday season will be above average.

The optimistic expectations for national retail sales bode well for Colorado. The Colorado Legislative Council and the Office of State Planning and Budgeting expect Colorado’s 2014 annual retail sales to be 6.0% greater than last year. Given the strength of the state economy, holiday sales should easily exceed the national projected growth rate of 4.1% and may exceed the 6.0% projection for the year.

Colorado average retail trade employment in November and December is about 10,000 workers greater than the average for the other 10 months of the year. A similar increase in retail employment should be expected in 2014.

Back in the day… a Hershey’s candy bar cost a nickel and a person needed a dime to get a Coke from the vending machine. (Diet Coke didn’t exist). Nickels and dimes had value back in the day.

And…it cost $.21 for a gallon of gasoline. Not only that, an attendant filled up the car, checked the oil, and washed the windows. Back in the day a car was taken to a service station, not a gas station.

Given that perspective, the current relief at the pump is still painful.

As we ring out the old year and ring in the new it is now possible to compare the annual costs of gas for Colorado and the U.S. This calculation assumes that 15 gallons of gas were purchased each week at the average price for all blends. The comparison follows:

How is that for relief at the pump?

Since 2009 Americans have felt the pain at the pump. The angst for Coloradans has been slightly less.

For the past 52 weeks, the average cost to purchase 15 gallons of gas per week was $2,760. Believe it or not, this was about $1 more than the previous 52 weeks, not adjusted for inflation.

As well, the cost for Coloradans was about $111 less than the U.S. total for the past 52 weeks.

Between 1997 and 2012, the Private Sector Real GDP and job growth for Colorado outpaced the nation.  For this period, data released by the Bureau of Economic Analysis and the Bureau of Labor Statistics shows:

More recently, the data tells a different story.  Colorado did not fare as well as the nation between 2009 and 2012.  While the rate of job growth was similar, U.S. output expanded at a faster rate.

Time will tell whether the Colorado output will continue to grow at a slower rate than the U.S. or if this is a short-term variance that will reverse itself in 2013 or 2014.

There are many data sets that can be used to evaluate the performance of the state and national economy. One of those metrics is Per Capita Real GDP. This measure is derived by dividing real output by the population.

Within that period there were some differences:

During the final years of the go-go 90s, Per Capita Real GDP for the state increased at a faster rate than the nation.  Since the 2001 recession, the nation has outpaced the state.