On November 6th, the Bureau of Labor Statistics released its monthly update for U.S. nonfarm payroll employment. The number of seasonally adjusted jobs increased by 271,000 in October. Over the previous 12 months, employment has increased by an average of 230,000 workers per month. That equates to 2.8 million per year.

The areas with the largest increases were professional and business services (PBS), health care, retail trade, food services and drinking places, and construction.
• Employment in the PBS Sector increased by 78,000 in October, compared with an average gain of 52,000 per month over the prior 12 months.
• Health care employment increased by 45,000 jobs in October. Over the past year, health care has added about 41,200 jobs per month, or slightly less than a half million jobs for the year. About 27,000 jobs were added in ambulatory health care services and 18,000 in hospitals.
• The number of retail trade jobs increased by 44,000 in October. This is well above the average monthly gain of 25,000 jobs for the past 12 months. In October about 20,000 were added in clothing and accessories stores, 11,000 were added in general merchandise stores and 6,000 were added in automobile dealerships.
• About 42,000 workers were added in food services and drinking places in October. For the past year the monthly average has been about 31,000.
• Finally, construction employment rose by 31,000 in October. This is slightly higher than previous months. About two-thirds of the October growth was in nonresidential specialty trade contractors.

Employment in other major industries was similar to the prior month.
It was encouraging to see this level of job gains. Next month, we will learn whether the level of October employment was a “one hit wonder” or a reversal of the downward trend that has been taking place since the second quarter.

On October 2nd the Bureau of Labor Statistics released its monthly update for U.S. nonfarm payroll employment. The number of seasonally adjusted jobs increased by a meager 142,000 workers in September.

Despite the weak job growth in September, the unemployment rate was unchanged at 5.1% and is likely to continue on a downward trend for the remainder of the year.

For the month of September job growth occurred in five major areas.

• Health care added 34,000 jobs in September. This is slightly below the average increase of 38,000 jobs per month over the prior 12 months. About 16,000 jobs were added in hospitals and another 13,000 in ambulatory health care services.

• Employment in information rose by 12,000 in September. The sector has about 44,000 more workers than a year ago.

• During September professional and business services added 31,000 jobs. This is well below the average of 45,000 per month so far this year. By comparison, the sector increased by an average of 59,000 in 2014. Notable job gains occurred in computer systems design and legal services. Because many companies in this sector are a part of the country’s advanced technology cluster, there are concerns that growth is not stronger.

• Retail trade employment rose by 24,000 in September. This is slightly less than the average monthly gain of 27,000 jobs over the past 12 months. Notable gains were in general merchandise stores and automobile dealers.

• Employment in food services and drinking places added 21,000 workers in September, well below the monthly average of 29,100 workers.

Once again, mining employment dropped sharply, this time a decrease of 10,000 workers. Most of the lost jobs were in support activities. Lower prices for a barrel of oil is taking a toll on the industry.

Employment in other major industries was similar to previous months.

Two things are unsettling about the employment report for September:
•The level of job growth is weak.
• The quality of jobs are weak. While it is great that people are finding work, many of the jobs have lower than average wages.

Time will tell whether the economy has headed south or if it has hit a bump in the road.

On August 7th, the Bureau of Labor Statistics released its monthly update for U.S. nonfarm payroll employment. The number of jobs increased by 215,000 in July and U.S. job growth falls in the solid-to-strong category.

The areas with the largest increases were retail trade, health care, professional and technical services, and financial activities.

If job gains continue at the current pace, average annual wage and salary employment for 2015 will be about 142 million. As a point of reference, the 2015 population will be about 322 million.

Throughout 2015, U.S. employment has continued to post steady gains (month-over-month prior year) although there has been a slight downward trend since the change in employment peaked in February.

This downward trend is thought to be normal volatility and not a cause for concern. Even with the decrease, the number of jobs added this year will be well above the 2014 total.

All eyes are on the Fed and how they will interpret the latest news from BLS. They would like to see strong job and wage growth before they start raising interest rates; however it is most essential for them to see sustained, solid U.S. job growth. Unfortunately, for workers wage growth is less critical.

The consensus among most economists is that gradual rate hikes will begin in September.

The bottom line – the Fed will raise interest rates and U.S. employment will increase by 3.1 million this year. At this point, both are positive signs for the U.S. economy. 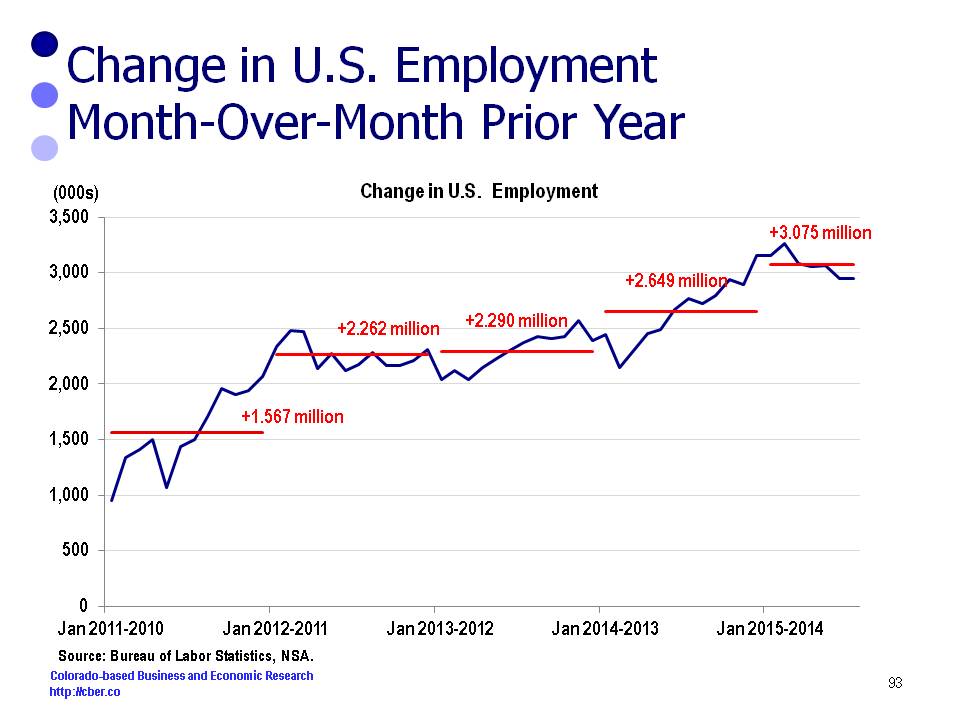 The lower level of growth in March does not necessarily signify a downward trend. Most likely it is a reflection of volatility related to changes in the extractive industries.

About 67.0% of total jobs added were in the Health Care; Accommodations and Food Services; Construction; Profesional, Scientific, and Technical Services (PST); and Manufacturing sectors.

Approximately 21.3% of all jobs added were in Leisure and Hospitality; however, the BLS estimate model has most likely overstated this YTD contribution.

About 9.9% of total jobs added were in the PST, Manufacturing, and Information sectors. These sectors are the source of primary and advanced technology jobs. 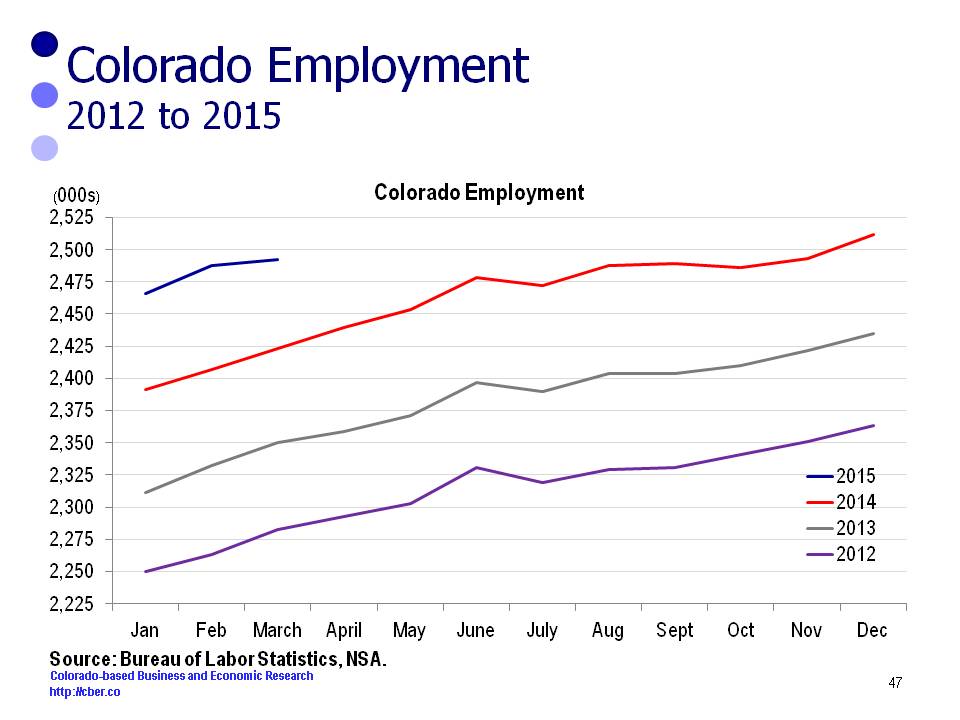 Nationally, average employment for Q1 2015 is about 2,265,133 jobs greater than Q1 2014 employment. While this rate of growth is solid, the Q1 value is less than the average number of jobs added during 2014 (2,313,033). A brutal winter in parts of the country prevented employment and output during the first quarter from being stronger. 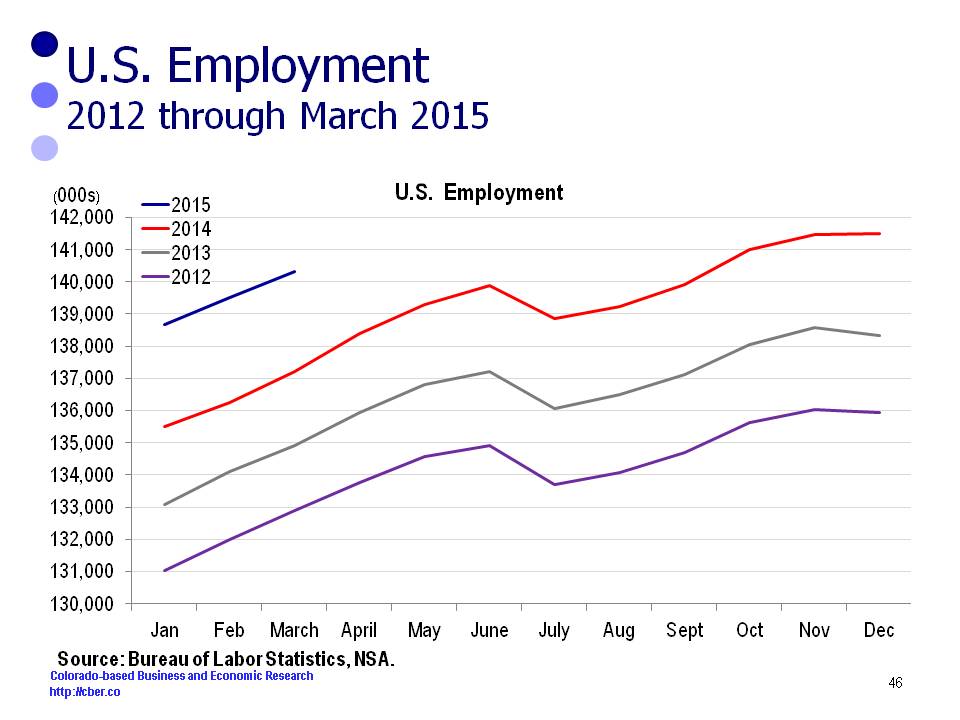 Last month the Bureau of Labor Statistics delivered a Labor Day surprise when its monthly employment situation press release stated the U.S. had only added 142,000 jobs in August. This month the BLS reversed their bombshell announcement; they revised the August jobs numbers from +142,000 to +180,000 and July was revised from +212,000 to +243,000. In other words, their previous estimates for these two months missed their mark by 69,000.

Total nonfarm payroll employment increased by 248,000 in September. For the month job growth was led by professional and business services, retail trade, and health care.

In addition, the number of long-term unemployed (LTE) was remained at 3,000,000 people. The LTE are those jobless for 27 weeks or more and they account for 31.9% of the unemployed.

The outlook remains positive for the U.S. and Colorado through the end of the year. 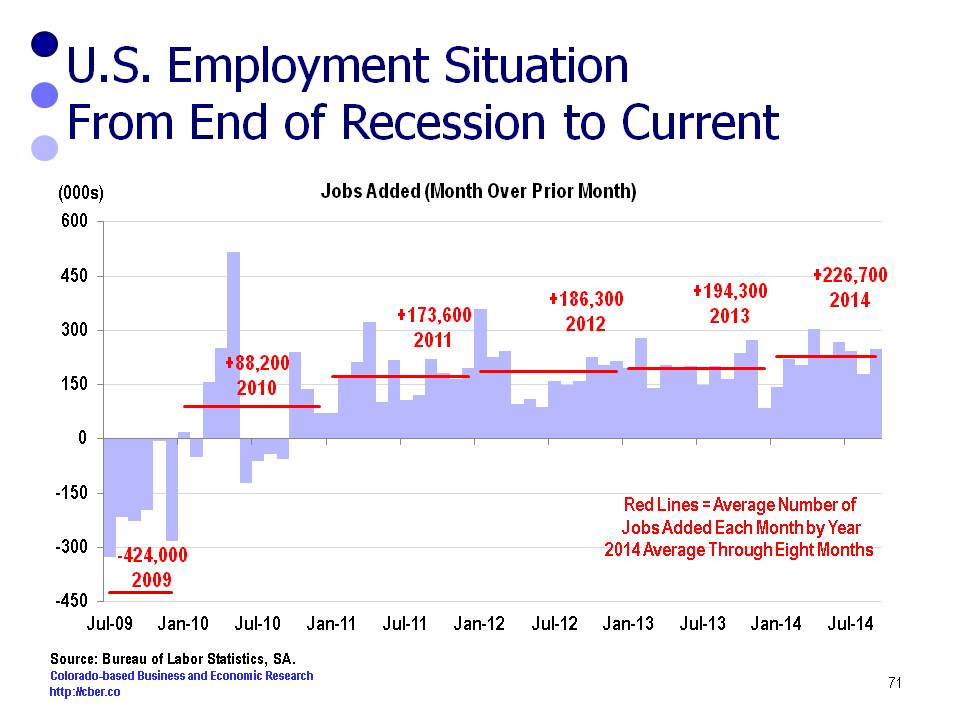 After an inauspicious start to the year, there has been strong U.S. job growth for the subsequent five months. The BLS presented the country with the ideal Fourth of July gift by announcing that total nonfarm payroll employment increased by 288,000 workers in June.

The sectors adding the greatest number of jobs were:

More importantly, July represents the fifth consecutive month that the month-over-the-prior-month change was above 200,000. This is the first time that has happened since the end of the Great Recession.

The June unemployment rate fell to 6.1%, down from 7.5% a year ago. Sadly, the number of unemployed has only declined to about 9.5 million.

Many economists believe strong U.S. job growth is on tap for the remainder of the year. 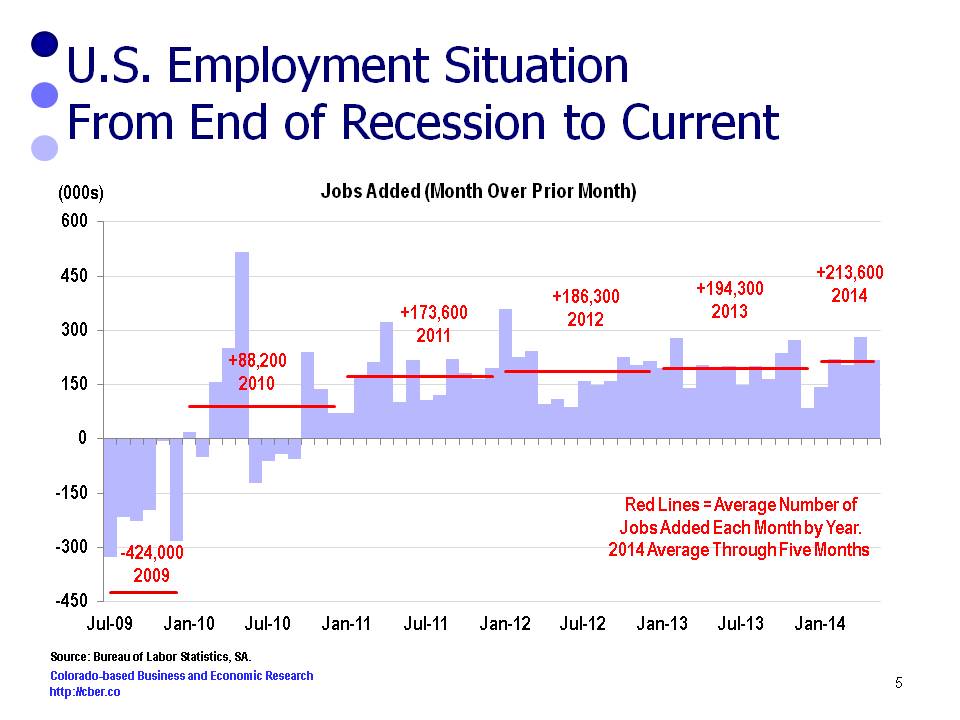 On June 6th the Bureau of Labor Statistics reported that U.S. employment increased by 217,000 in May. The sectors adding the highest number of jobs were:
• Professional and business services.
• Health care and social assistance.
• Food services and drinking places.
• Transportation and warehousing.

After a weak second half in 2013, there is strong growth in U.S. employment through the first five months of 2014.

Several months after the 2007 recession began, some economists projected the economy would not recover until 2014. Six years sounded like it was much too long, particularly since the country had just gotten back on its feet from the 4 1/2 years of the 2001 recession and recovery. The most recent announcement by the Bureau of Labor Statistics (BLS) illustrates how the ongoing lack of primary job creation has caused the recovery to be so long and painful.

On June 1, the monthly BLS press release stated, “Nonfarm payroll employment changed little in May (+69,000). Employment increased in health care, transportation and warehousing, and wholesale trade but declined in construction. Employment was little changed in most other major industries.”

If Colorado is growing at the same pace as the U.S., the BLS will announce, later in the month, that the state will post a gain of about 1,200 jobs in April. (Colorado nonfarm employment is about 1.72% of the U.S. total.)

When this release hit the newswires, the equity markets tanked. In addition to the weak job gains, investors were worried about Greece’s debt problems, U.S. debt, the recession in parts of Europe, the slowdown in the Chinese and Indian economies, and much more. While these are clearly legitimate concerns, the decline in employment should not have come as a surprise. Past economic forecasts prepared by The Conference Board foretold of the pending dip.

TCB has forecasted that 2012 output will be at its lowest level in Q2. It stands to reason that subpar output will be accompanied by weak employment growth for April, May, and June. On a positive note, output (consumption, housing starts, and capital spending) is projected to improve slightly in Q3 and Q4. The average rate of output growth for the year will be about 2.2%. This suggests that employment will improve along with the increased output. Next year, 2013, will only be slightly better. The good news is that the trends are in a positive direction.

The recovery will continue to be painfully slow for a number of reasons:
• According to the TCB, output in advanced economies is growing at a rate of 1.3% – worse than the U.S. The emerging economies have stronger growth, 5.6%. Colorado companies that export agricultural and manufactured goods may have greater opportunities in emerging countries.
• The number of federal workers continues to decline.
• The intent of the stimulus funding was to create private sector jobs. Those jobs were supposed to kick in when stimulus funding was reduced. Unfortunately, too few private sector jobs have been created and funding is being diminished. This makes the stimulus efforts appear to be ineffective.
• Although revenues have improved for many state and local governments, their budgets remain tight. In Colorado, state employment is flat and local governments have fewer jobs than one year ago.
• Overall inflation has been kept in check; however, energy prices, and the prices of other commodities, are noticeably higher than when the recession started.
• The construction and housing markets have not rebounded as quickly as anticipated. Colorado construction employment is at the same level as it was in the mid-1990s, although it is finally trending upward.
• Companies have been able to meet their sales targets by investing in capital rather than labor. Productivity gains have allowed companies to maintain a competitive position without adding workers. At some point in the next 18-24 months this will change and companies may be forced to add workers.

The latest job numbers are disappointing, but not surprising. There will be slight improvement in the second half of the year, with continued volatility in 2013.

Continued patience is required. At the earliest, 2014 will be the year when stronger growth can be expected.