Nationally, employment remains strong. The non-seasonally adjusted data shows that an average of 230,000 jobs have been added each month through seven months. Most likely the U.S. will add about 2.5 million jobs this year.

On a positive note, the labor force participation rate appears to have bottomed out.

Real GDP increased by 4.0% in Q2. The reasons for the increase in the real GDP were:

Factors that offset the growth were:

An area of potential concern is construction. Hopefully the industry is taking a breather after its recovery from the Great Recession. The number of building permits issued over the past year has been flat.

In addition, the housing market is cooling off. The rapid appreciation in housing prices is tapering off.

Both manufacturing and services have been solid since the second half of 2009. At least this is being reflected in the growth of the GDP.

Implications of the National Economy on Colorado

These indicators have several implications for Colorado. The short-term outlook points to stronger personal consumption, which bodes well for retailers and tourism, particularly if Mother Nature cooperates by bringing early and frequent snow for the ski season.

Stronger retail sales will add to the coffers of the state and local governments, which should point to continued increases in government spending. This would benefit everything from schools to infrastructure.

The unemployment rate and the number of unemployed continue to trend downward; however, critical labor shortages are developing in many occupations. This is particularly critical to high-tech industries.

Labor shortages are impacting all industries in Northern Colorado which is experiencing rapid growth as a result of the extractive industries boom. Workers are being raided from other companies and industries, which will ultimately drive wages up.

The Colorado construction market still appears to be solid and the value of residential housing is growing, albeit at a slower rate than last year. At the same time the Dow Jones Industrial Average is about where it was at the end of 2013.

Appreciation in the housing and equity markets play into consumer confidence. If consumers feel their house and investments have appreciated, their wealth on paper is greater, and they are more likely to purchases goods and services.

The following five sectors account for about 45% of total jobs in the state, yet they are responsible for almost 75% of the jobs added this year.

All of these jobs are important to the state for various reasons.

Since the end of the Great Recession in July 2009, the unemployment rate has fallen from 9.5% to 6.2%. In addition, the country has added 8.8 million jobs.

There are two ugly truths about the workforce that are seldom discussed in connection with this good news. 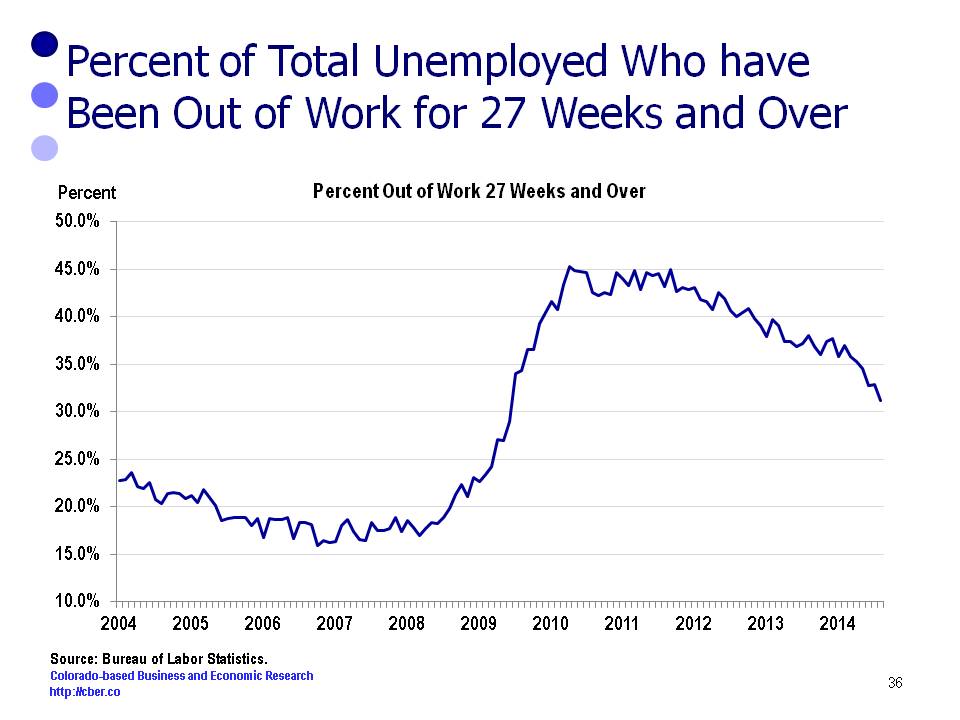 The U.S. economy got off to a horrendous start with weak employment in January and -2.6% real GDP growth in Q1. There has since been enough improvement in Q2 for the Federal Reserve to announce it will end QE3 in October. As well, interest rate hikes are likely to occur in 2015, which is good news for some and bad news for others.

It appears the Fed has satisfactorily unwound the quantitative easing program, something many economists feared might not happen at the time it was put in place. Today, most members of the Fed are bullish on the economy, at least for the remainder of 2014. Several members have expressed short-term concerns because retail sales, healthcare spending, and residential construction are underperforming.

The equity markets have been volatile in 2014, but the Dow has passed 17,000 and continues to establish new record – highs. Improved equity markets have increased the personal wealth of Coloradans and given them reason to remain optimistic about the growth of the economy.

In addition, the number of unemployed continues to decline, dropping to 9,474,000 in June. This is down significantly from 11,747,000 a year ago. By comparison, there were 15,333,000 unemployed in April 2010 at the height of the Great Recession. On the other hand there were 6,731,000 in March 2007 just prior to the Great Recession. Despite the improvement, there are still a number of people struggling to find work.

A similar situation exists in Colorado. Unemployment continues to trend downward, but the number of unemployed remains higher than desired. It has decreased from 6.2% at the end of 2013 to 5.5% in June. Unfortunately, about 150,000 workers remain unemployed. While this number is decreasing at a painfully slow rate, it is about 60,000 greater than the low point in April 2007, the low point prior to the recession.

While the decrease in unemployment is a positive sign, some industries such as construction, manufacturing, and segments of high-tech are struggling to find trained workers. In smaller metro areas such as Weld County there will be a domino effect as higher paying jobs in the oil and gas industry may pull workers from local manufacturers, hotels and restaurants, and construction companies.

The situation is slightly different for some rapidly expanding high-tech industries that require specialized talent (software, technicians, machinists, etc.). Talent attraction is a necessary option for supplying trained workers for these rapidly growing companies. This can be a challenge because there are national shortages in key occupations for the high-tech industry. It is important for Colorado to “train their own” but at the same time Colorado must continue to attract workers from other states.

Through the first six months of 2014 Colorado has added 67,000 jobs compared to the same period last year. Looking ahead, Colorado will continue to see strong growth through the remainder of the year. In certain parts of the state, that growth will occur as an indirect result of the extractive industries and agriculture. In the metro areas, it will be driven by broad-based growth across many industries. The leading areas of growth will continue to be tourism, construction, health care and sectors that are related to advanced technology.

As the country has recovered from the Great Recession there has been concern about why the economy hasn’t recovered more quickly. Part of the reason is the decline in the labor participation rate .

After peaking in 2000, the labor participation rate has declined steadily. The rate is the percentage of people who are either employed or actively looking for work.

Since 2000 the labor participation rate has declined from 67.3% to 62.8% at the end of 2013 – a significant drop. While there is debate about the reason for the decrease, the primary factor is an increase in discouraged workers (a weak recovery) and a change in demographics (more baby boomers retiring).

On November 8th the Bureau of Labor Statistics reported the U.S. employment was up by 204,000 in the month of October. This was a shock to many, particularly given the weak ADP numbers published in late October.

The BLS delivered a second surprise by bumping up the net jobs added for August and September. Unfortunately, the number of unemployed in October was only 44,000 less than August, and the unemployment rate, 7.3%, was the same for both months.

U.S. job growth was strong in the first quarter of 2013, but the increases became more tepid as the year progressed. Average job growth for the past three months is slightly above 200,000. The December release will show the extent to which Congress’ game of chicken with the Federal budget derailed this momentum.

There is good news on the unemployment front – the rate and number of unemployed workers continues to decline.

In many cases, there is a clear mismatch of worker skills and company needs. In part, this has exacerbated the length of the recovery.