On February 7, Super Bowl 50 will feature the Panthers vs. Broncos. Without a doubt, most Coloradans think the outcome of the game is a foregone conclusion. Some fans have painted their houses and dyed their hair orange and blue because they know the Broncos will win.

One of the fun parts about the hype of Super Bowls is the statistics associated with the big game. For example, CBS Sports has reported that on Super Bowl Sunday fans will drink 325.5 million gallons of beer and eat 1.25 billion chicken wings. Really?

From an economic perspective how do the city of Charlotte and Denver match up?

The following table includes economic data from the Bureau of Census Quickfacts (2/14/2016) comparing the city of Denver and Charlotte.

Both are prosperous cities. Panthers vs. Bronocs. Game on!

Rankings are fun… Whether it is being recognized as a party school,  highly educated, or fit, Boulder is #1. Recently, Boulder also laid claim to another title. Boulder is #1 for having the greatest number of toilets per capita. 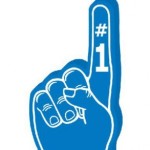 Some economists and data geeks are obsessed with producing rankings. If you give them a data series, they will open their Excel spreadsheet, plug the data in, and sort it. In no time they will produce a new set of rankings.

Rankings have high entertainment value. They can be used for bragging rights and they can be used for creating taglines to promote a variety of causes, both good and bad. Some Coloradans use the tagline, “Colorado ranks ahead of only Mississippi in funding for education,” to solicit support for the increased funding. The tagline tugs at heartstrings or parents with young children, but it does not clearly represent reality.

Rankings of economic data have value if they are used for comparative or analytical purposes such as showing the strengths or weaknesses of a region as a means of addressing a challenge or opportunity. For example, if Colorado has a high concentration of companies that conduct research in lasers, a discussion about the competencies of these companies can be used to attract and retain photonics, aerospace, and bioscience companies in Colorado.

Back to the issue in the first paragraph…Boulder is #1!

Recently, Redfin.com, a real estate company, produced a report entitled “Tons of Toilets: Which City Sits atop the Throne?” Like many rankings, this one had high entertainment value.

At the top of the list is Boulder with 305,200 toilets or 1.02 toilets per person. Approximately 5.3 million gallons of water are flushed daily.

Second on the list is Washington, D.C. with almost 5.5 million toilets or .98 toilets per person. Approximately 95.6 million gallons of water are flushed daily.

Denver is ranked 6th on the list with almost 2.4 million toilets or .94 toilets per person. About 41.8 million gallons of water are flushed daily.

Shortly after the rankings were released my inbox filled up with e-mails from peers. They were quick to point out the correlation between the rankings of the education levels of these cities to their toilets per capita rankings. Don’t worry, their comments are not appropriate for this document and have been flushed down the toilet.

Like most other rankings, the listing of the race to the top of the throne was used to promote a cause. In this case, the rankings were intended to draw potential customers to the Redfin website – and it worked. I was quickly reminded that I cannot afford to live in Boulder.

This ranking was fun and it was harmless, but it provides a lesson. It is important to be vigilant when reading and using rankings. More often than not, they have limited value unless they are used with other data to make a valid and constructive point.

Just over 70% of the jobs added were in the Denver MSA.

The recovery from the Great Recession was led by Fort Collins and Greeley, followed by Boulder and Denver – then Pueblo. Grand Junction and Colorado Springs have not returned to 2008 peak employment.

Higher education is critical to the future of the U.S as a world leader. Our universities educate the future leaders, athletes, scientists, and bartenders. As well research in conducted that helps the country maintain its competitive advantage in innovation and global output.

At the time the University of Colorado joined the PAC-12 Athletic Conference, CU President Benson got in hot water for discussing the academic strength of the PAC-12 and the academic weakness of certain schools in the Big 12. Ironically, there are only two schools from the former Big 12 Conference on the list of underperformers and they are five PAC-12 schools, including CU Boulder, on the list of underperformers. Hopefully, the mention of the two CU campuses on the underperformer list will be addressed.

There are a variety of reasons schools may be underperformers, some of those reasons relate to deficiencies in the universities, while others relate to idiosyncrasies in the ranking process. There are flaws in reports such as those produced by U.S. News just as there are flaws in the system used to determine the national collegiate football champion. Having said that, the rankings provide universities with a set of metrics for evaluating their systems and processes and improving services to their students.

During this period the Denver MSA lost 20,000 workers, the Boulder MSA shed 4,900, and Colorado Springs payrolls decreased by 3,600. Employment in the state’s top three MSAs declined by 28,500 workers. The drop-off in Denver and Boulder began in 2002 and continued throughout the decade, whereas it started in 2007 for Colorado Springs. This was around the time Intel and other high-tech and semiconductor companies left the area.

At the risk of being repetitious… rural Colorado and the smaller MSAs were the only areas to add workers during the decade. Given the weakness in Colorado’s three major metro areas, it seems why the state is struggling to add jobs at a sustained level in 2011.

The Denver Branch of the Federal Reserve Bank of Kansas City recently announced that it will open a “Money Museum” and conference center in downtown Denver in early January. The museum will highlight exhibits discussing the responsibilities of the Federal Reserve. For example, information is provided about how the Fed establishes monetary policy with the intent of maintaining a stable economy.

In addition the museum will include displays that show how to detect counterfeit bills and the amount of space that is needed to store $30 million. Visitors may also receive samples of worn out or historical currency that has been shredded.

An important function of the museum is to provide education opportunities for K-12 students and teachers. The museum website indicates that class visits include a 30 minute presentation of personal finance concepts. More extensive sessions are available for K-12 teachers that demonstrate how to meaningfully incorporate economics and financial principles into the classroom.

The Denver Branch is located on the 16th Street Mall in Downtown Denver, between Arapahoe and Curtis streets.  Published hours for the museum are 8:30 a.m.-4:30 p.m. weekdays except bank holidays. Additional information can be obtained by visiting the Kansas City Fed website (www.kansascityfed.org/moneymuseum).

As an infrequent rider on RTD buses, I recently experienced sticker shock when I boarded a bus from DIA to Boulder and was asked to pay $12 for a one-way ticket. Back in the day, the fares were $4.

My first thought was, “Well, I will show them for raising the fares. Next time I will drive.” So I quickly did the math to confirm my beliefs.

Total round-trip mileage from Boulder to DIA is roughly 90 miles. Assuming $.50 a mile for vehicle operating costs, the expense for me to drive would be about $45, not to mention parking fees and the hassle of dealing with traffic. It was clear that the round trip fee of $24 was the most cost effective way to travel, at least for one person.

After I sat down I noticed signage on the bus that encouraged visitors to go to its website for a free lesson in mass transit economics. When I got home, I visited www.rtd-denver.com/economics and learned that fares account for about 30% of total revenues. Approximately 69% is derived from sales tax revenues and one percent comes from on-vehicle advertising and other sources. The economic lesson concluded with a statement that an $18 million deficit is projected for the 2011 budget.

To address this situation, RTD solicited feedback from its customer base over recent months. They asked about possible and preferred solutions that could be considered as part of a fiscal plan to address the projected shortfall. A short list of considerations include wage and hiring freezes, staff furloughs, service reduction and fare increases.

Many of the basic daily services that we take for granted during good economic times are facing challenges at least as severe as those faced by RTD. We can expect to face those challenges for awhile. Stay tuned to see how RTD makes the rubber meet the road.